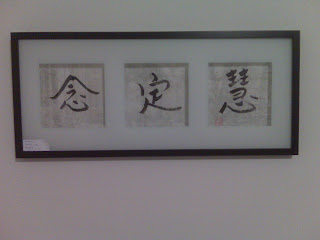 An example of Chinese calligraphy by Vietnamese Zen master Thich Nhat Hanh. The words are “Mindfulness,” “Concentration” and “Insight.”

In August 2009, Thay, as his students call him, fell ill and was hospitalized in Boston. The doctors wouldn’t let him do anything except one hour of walking meditation each day in the park across the street from Massachusetts General. But people came to him asking for money for Cambodian children and he offered them money from his calligraphy. His monastic followers remonstrated him that the calligraphy was to support his own monasteries. His response? Why not both? Thay calligraphed hundreds of words in English and Chinese on sheets of Japanese paper in his hospital bed to sell for both causes. This is one which I bought.

I also have an example of his English calligraphy here.