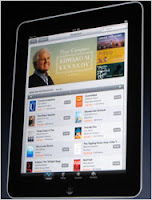 Today’s Apple announcement (liveblogged at the NY Times) had Steve Jobs diplomatically say of Amazon’s Kindle, that Apple “we are going to stand on their shoulders and go a bit farther.” The iBook app allow eBook viewing and purchasing within the application (like iTunes), so it’s not necessarily tied to a particular hardware. The Times notes that Penguin, Harper Collins, Simon & Schuster, Macmillan and Hachette are signed up but not yet Random House.

The Times notes: “Apple uses the ePub format, the most popular open book format in the world. It’s unclear what digital rights management they are using and whether these books will be transferable to other devices that support ePub, like the Barnes & Noble and Sony e-readers.”

In addition, Apple debuted a newspaper reader using the New York Times: “We think we captured the essence of reading a newspaper,” (quoting Jennifer Brook of the Times). The Times live-blogging notes “The app allows people to save stories to the device, resize text and change the number of columns, skim photos and play video. It appears to look quite a bit like the Times Reader application.” Which might explain why it was developed in only 3 weeks.

Updated: 5:15 pm: David Pogue writes “The iPad as an e-book reader is a no-brainer. It’s just infinitely better-looking and more responsive than the Kindle, not to mention it has color and doesn’t require external illumination. (Book fans should note, however, that the iPad e-bookstore won’t offer bestsellers at $10 each, like Amazon and Barnes & Noble do. And although Apple says the iPad has a 10-hour battery life, it hasn’t yet said ‘doing what.’ Playing video eats up battery a lot faster than reading e-books.) [….] T]he iPad seems like a dream screen for reading and watching—at some loss of convenience in creating. True, there’s an on-screen keyboard, big enough to type on with both hands in the usual way. And Apple will offer a specialized multitouch word processor, spreadsheet and presentation app for $10 each. But I’m guessing that, with no mouse and no physical keys to feel, writing and editing will be more effort than on a laptop.”


It’s 1.5 pounds and starts at $499. The low-end AT&T plan is $14.99 with no contract. Still leaves open the whole question of economics for those with less money to burn.

Update 1/28/09 7:35 : Tyler Cowen at Marginal Revelation remarks “My theory is that Apple wants to capture a chunk of the revenue in this nation’s enormous textbook market — high school, college, whatever.  Why lug all those books around?” He seems the major influence in the university. He has other comments and links. That seems sound. (h/t Andrew Sullivan)